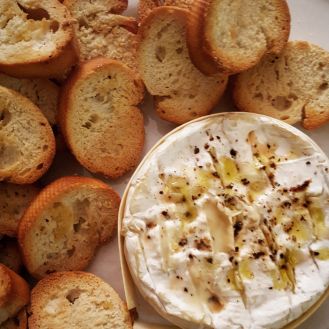 With thyme and garlic

As you can see, I’ve made this a lot. It’s gooey, oozy, comforting and great to share with friends. I have done a few with different flavourings, but they all have garlic. YUM.

It’s so simple but effective, with everyone diving in for more.

1 clove of garlic, thinly sliced into about 10 slices

Either a sprig of thyme/rosemary/chives, chopped

Some bread to make the toasts i.e. baguette, ciabatta

Start by preparing the onion marmalade. Melt the butter and 1 tbsp of the olive oil in a frying pan and add the onions. Season well and cook for around 15 minutes on a low heat until soft and starting to caramelise. Add the sugar and vinegar, mix well, turn up the heat and let bubble until it thickens slightly. If it get’s too thick, you may need to add a splash of water. Cook until it has the consistency of a chutney. Pour into a serving bowl and leave to cool.

Next, pre-heat your oven to 180oC. Slice up your baguette or ciabatta and lay on a baking sheet. Brush each slice with a  little bit of live oil and season with salt and pepper. Bake for 20 minutes, turning half way, until brown and crisp on both sides. Leave to cool.

Now for the cheese. Remove from it’s box and remove the paper it’s wrapped in and discard. Put the cheese back into its box, leaving the lid off for the moment. Poke slits into the cheese, so you can stuff the garlic into it. Drizzle over some of the olive oil and season with salt and pepper. Top with whatever chopped herb you are using. Place the lid back on, place on a baking tray and bake in the oven for 15 minutes until the middle has melted but it’s still holding its shape.

Serve immediately with the toasts and onion relish.